Cities in Florida with the best weather

Let’s be realistic – there’s a reason why Florida has been dubbed the “Sunshine State”. There’s rarely a state nickname more deserving than Florida’s – seeing as it’s really one of the sunniest areas in the United States. Obviously, such pleasant weather definitely makes it a desirable place to live. Bear in mind, though – Florida is a big place. Meaning that, if you’re not careful, you could easily end up in a place that doesn’t have the weather that’s eponymous to Florida. Sure, this could spoil a nicely-planned vacation, but that would be no big deal. However, if you plan on moving to one of the many cities in Florida – you’d better learn all about the local climate! That’s how you won’t end up moving to Miramar which is not famous for nice weather. And that’s precisely what we’re here to help you with, so read on and enjoy!

When people think of cities in Florida, in nine out of ten cases; they’re thinking of Miami. It’s only natural, seeing as we’re talking about the biggest metropolitan area in the Sunshine State. If you’re looking for a wealth of opportunities in this area, you’d be best served moving to Miami. After all, unlike the tourist-driven general economy of Florida; Miami has other developed service industries as well, so finding work here shouldn’t be difficult regardless of your profession of choice. Also, the city has a very stable real estate market, which is important for housing – as well as plenty of great amenities. 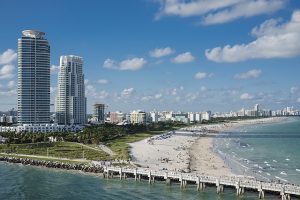 Miami is obviously one of the first cities in Florida you think of!

However, as most people moving from Miami to some other town will tell you; the place has a couple of downsides as well. Firstly, the cost of living here is pretty steep because it’s the commerce center of the state. Apart from that, the city has a relatively steeper crime rate compared to other local towns and cities; as well as public schools of questionable quality.

Next up, we’ve got Hialeah, in Metro-Dade County. This city is definitely in the top ten biggest towns in the entire state; with more than 200,000 people in the urban area. If you’re going to hire a moving company like Cross Country Moving Group to relocate somewhere in the Sunshine State, this is definitely worthy of your attention.

Its livability score is quite similar to Miami’s according to most surveys; which is why it has a similar place on our list as well. Obviously, their weather is quite similar due to their geographical proximity. While the climate is quite cozy here, you should still be ready for costly living expenses; though the crime rates aren’t as high.

Our third pick of the draft is Tallahassee – the capital of Florida! And also, it’s the seventh biggest city, right after Hialeah. It’s also got one of the most comfortable weather cycles in all of Florida, definitely making it a great place to live in that regard. Apart from that, you’ll probably be able to find all of the amenities you might need here; along with a great housing market. What truly sets it apart is the quality of public schools in the area – something first-time homebuyers will definitely be interested in. And these school districts are arguably the best among all of the cities in Florida we’re going to mention here!

When you’re moving into a new home, you may want to learn all the interesting facts you can about the area. And when it comes to Fort Lauderdale, you should know that it isn’t just one of the best cities in Florida regarding the weather; it’s also got a sprawling canal system! In fact, it’s often referred to as the “American Venice”. This is just one of the things that makes it a very popular destination for tourists. Plus, if you want to pop over to Miami from Fort Lauderdale, you’ll be able to do so easily; it’s situated just 20ish miles outside of Miami!

So, you’ve got a good employment rate in comparison to Florida’s average, fantastic weather, a ton of amenities, and a bearable living cost – everything you want in a Florida home!

There’s really no list of cities in Florida that have good weather without at least a passing mention of Tampa; the weather here is sunny even by Florida standards! And apart from this, this city found near the Gulf of Mexico is also renowned for low living expenses, a solid variety of amenities for different lifestyles; as well as a vibrant and exciting cultural scene. If you’re an artsy, hipster type – this is definitely the best Florida city for you! Anyone moving out of Brooklyn would feel right at home here. 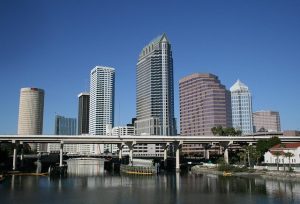 Tampa offers everything you need from Florida, both in terms of weather and amenities!

Orlando is the fifth biggest city in Florida – and if you’re looking for a fun time in Florida, this place will serve you just right. It proudly boasts the title of the world’s Theme Park Capital – and not without a good reason either! Apart from fun activities, it also has decent living standards and an average rate of unemployment. 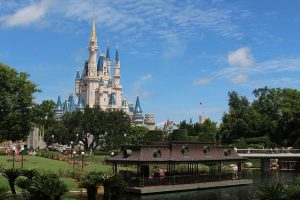 There are more fun theme parks in Orlando than basically anywhere else on the continent!

As you may have gathered, there are plenty of cities in Florida that have gorgeous weather. However, apart from that, there are quite a few other factors that you need to take into consideration before deciding to relocate to any one of them. So, think long and hard and make a sound decision. Nice weather is a good thing to bear in mind when going on vacation, but a permanent Florida residence will have to fulfill other, more grounded and realistic needs as well.